In 1898, chemist and pharmacist Caleb Bradham developed “Brad’s drink” - a combination of carbonated water, sugar, vanilla, rare oils and cola nuts. It made his drugstore in New Bern, North Carolina a popular destination. Renaming his drink in 1902, Bradham began to bottle and distribute Pepsi-Cola. The first franchise was established in 1907.

Gillette - the origins of a local franchise 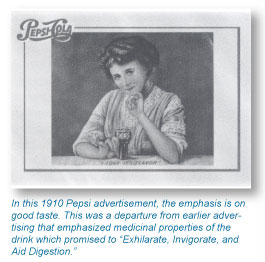 The Gillette Pepsi-Cola Companies were founded by Norman Gillette, Sr., who started in the business in 1937 when a wholesale grocer in Winona, Minnesota decided there was no future for them in soft drinks. The grocery owners contacted Gillette and offered to give him the Pepsi-Cola franchise if he would buy their bottles and wooden shells, which Gillette purchased for $1,200. Gillette originally ran the struggling business out of Viroqua, Wisconsin with one delivery truck. However,national marketing was going to change the demand for Pepsi-Cola. The “Twice as Much for a Nickel” campaign began with signage and print ads, but in 1940, the very first radio “jingle”, which also became a mainstream hit, broadcast this 12 ounce bottle bargain to thousands of new Pepsi-Cola drinkers.

Gillette had two major strategies for local marketing - saturation advertising and sampling. He put signs everywhere and bought advertising on local radio stations. If there were areas that weren’t selling well, he would send a truck filled with product and give out samples of Pepsi-Cola. Soon consumers wanted more and store keepers who at first refused to open accounts with Gillette were now begging for more cases. 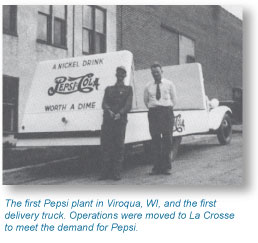 In addition to the obstacles of production and distribution, there was also the need to overcome some cultural attitudes to increase sales - the fact that bottled soft drinks were originally sold only during the summer months and during World War II, Pepsi-Cola Bottlers were subject to sugar rationing shortages while their major competitors were not. This was the start of the ‘cola wars” as Pepsi-Cola had to battle for market share during post-war America when millions of soldiers came back as Coke drinkers.

The struggles of doing business during the war had a major impact on the future of The Gillette Group Inc. Because of increased costs due to sugar shortages and rationing, the Big 4 Bottling Company of southeastern Minnesota decided to make the primary focus of their business the soft drink brands in smaller bottles - 7Up and Dr Pepper. The Pepsi-Cola Company contacted Gillette to take over from Big 4, resulting in the acquisition of the Pepsi-Cola franchise for the Rochester area. 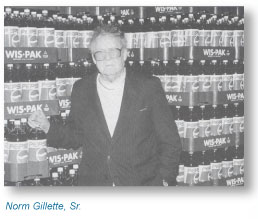 In the late 1950s, Pepsi-Cola’s leadership developed the “Be Sociable – Drink Pepsi” advertising message and there was a new surge in sales and consumer interest. In 1964, the “Pepsi Generation” advertising campaign was born and the popularity of soft drinks in cans exploded. Also in 1964, Pepsi acquired the Mountain Dew brand from the Tip Corporation of Marion, Virginia. Gillette took on this new brand and invested in it as much if not more than anyone in the United States. The brand gained success nationally and due to Gillette’s belief in the brand at the beginning, sales surged in our market. From the start, Mountain Dew was a winner and continues to be one of Pepsi’s most popular brands. Maintaining this belief in innovation, Pepsi continues to lead the market with new brands, flavors, and packages to meet the changing needs of today’s consumer.

The Gillette Pepsi-Cola Companies continue to lead in their markets through the enduring philosophy and vision of Norman Gillette, Sr. - to continually emphasize the Pepsi-Cola image and uphold a determination to be the best. Our modern day mission, vision and values expand on Norm's vision.